* Following the excellent policy of subjecting (bad) women to violence in the name of equality, Bond lets some broad take a club to the head. I've hardly settled in the couch with my beers and my whisky, and I'm thrilled already.
Sadly, my mood is spoiled when Bond camouflages himself by wearing a duck on his head. Here starts the nasty trend that Roger Moore will later perfect: Making Bond look silly and ridiculous instead of wry and witty.

* The title sequence is perfect, timeless and elegant. The tune is fitting, too, even though Shirley is screaming like a wounded buffalo. I'm making a mental note that this may be the best title sequence of them all.

* It doesn't take long before i notice that the director actually seems to give a crap about his job as well. That aerial shot of the hotel is great, and there's good craftsmanship all around.

* The gadgets come into full play here, and we get to see Q's gadget lab. It's about time. It's funny and scary at the same time: grown men treating deadly weapons like toys. 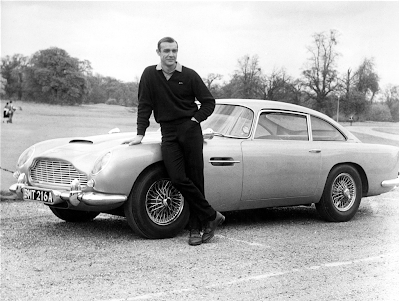 Dude, I know how you feel.
* Goldfinger is a cool bad guy too, against all odds. I give a truckload of credit to the actor portraying him for this feat - Gert Fröbe. He takes what could have been an underwhelming Bond villain and lends him credibility and humor. That, combined with the character's greed and total disregard for human life, makes him very memorable.
He gets to deliver my favorite piece of dialogue in all the Bond movies, too. I love you, Gert.

* I have mixed feelings about his henchman Oddjob, though. I like that he seems to love to fight, and is even amused at times, by the fact that Bond thinks he might be able to defeat him. I do not, however, like his stupid hat. Why? Because I'm not seven years old, that's why.

* Using Fort Knox is good. Whenever the Bond movies use recognizable landmarks, it seems to anchor the series in reality and add scope. Except when it's done stupidly. That's going to happen a lot from now on.

* So third time's the charm. Goldfinger is the first Bond movie that really delivers, and everybody knows it. Still, people waste time on Dr. No and From the Soviet Union With Camaraderie. Tsk, tsk.

* Spoiler: Goldfinger doesn't actually have a finger made of gold.

Posted by Marius Vibe at 1:15 PM No comments:

The Superficial Bond Reviews --- #02: From Russia With Love

* The opening sequence of From Russia With Love is really exciting, with a fun twist. That whole sense of lurking danger is established right away when the bad guy murders a Bond double, and you carry that anticipation of a showdown with you for the whole movie.

* The big, bad henchman is introduced to the series, and we've only reached the second movie. Cool.
Also, that henchman is a Nazi version of Quint. I'm crapping my pants on behalf of Bond... and that's a good thing.
The scene where Frau Blücher punches Nazi-Quint in the gut with brass knuckles is fantastic. Makes one laugh and say "aaawwwwyeahhh!" at the same time. 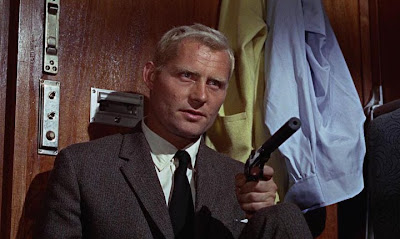 "'Bond'? Isn't zat a Jewish name?"
* Bond finally gets a suitcase that does more than carry documents. It does cool stuff. This, finally, qualifies as a gadget, and makes up for the lack of gadgets in Dr. No. It's also a kind of general gadget, like a Swiss Army Suitcase. It's not one of the gadgets that is painfully specific, and that coincidentally is exactly what Bond needs to get out of trouble. More on this later.

* There's some genuinely sexy moments between Bond and the Russian chick, and also some interrogation via the "smacking the bitch around a little" technique. I've always found this element to be very good for the James Bond character. It de-romanticizes him and lends credibility to 007.

* The whole SPECTRE thing starts to unfold, and that's exciting. It expands the Bond universe and hints to real ambitions concerning the film series.

* From Russia With Love is also about 20 minutes too long.
There's a pretty random sequence with the Gypsies that has a genuine WTF moment in it. Chick fights aren't always entertaining.
Also, there's a half-hearted North by Northwest ripoff that I don't care about (with a helicopter), and an equally unexciting boat chase.

* Scratch that - it's probably 30 minutes too long. The climactic train sequence is slow and boring. It doesn't really build up to Bond's fight with Nazi-Quint, as it should, it just drags on. If they just gave Bond a car already, he wouldn't have to travel by train like some hobo.

* The Train Fight is excellent, though. It looks real and intense, it uses the confined space brilliantly, Connery gets to use his obvious athleticism, and the two combatants seem evenly matched. It even ends in a nasty, gritty way.
You useless, untalented, upstart directors who feel you have to shake the camera around in every fight scene like the camera operator has cerebral palsy, you can all piss off and die. Or learn from this.
Jason Bourne my ass.

* There may be some lame scene with Frau Blücher and a knife shoe at the end of From Russia With Love, but I'm not sure. This whole movie is dead after that train fight anyway, and I don't care.
The second film is also, like Dr. No, a "valiant effort", in that it shows promise of something that may become cool at some point of time... but by itself, it's pretty bland. Some sex and one great fight, with lots of fluff around.
Better luck next time.

FIRST   PREVIOUS   NEXT   LATEST
Posted by Marius Vibe at 9:45 AM No comments: 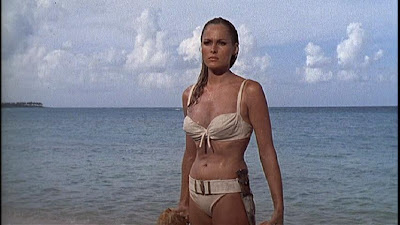 Here's another boxing article I wrote for East Side Boxing:
Stieglitz defeats Ornelas
Posted by Marius Vibe at 7:53 PM No comments:

Posted by Marius Vibe at 3:19 AM No comments: 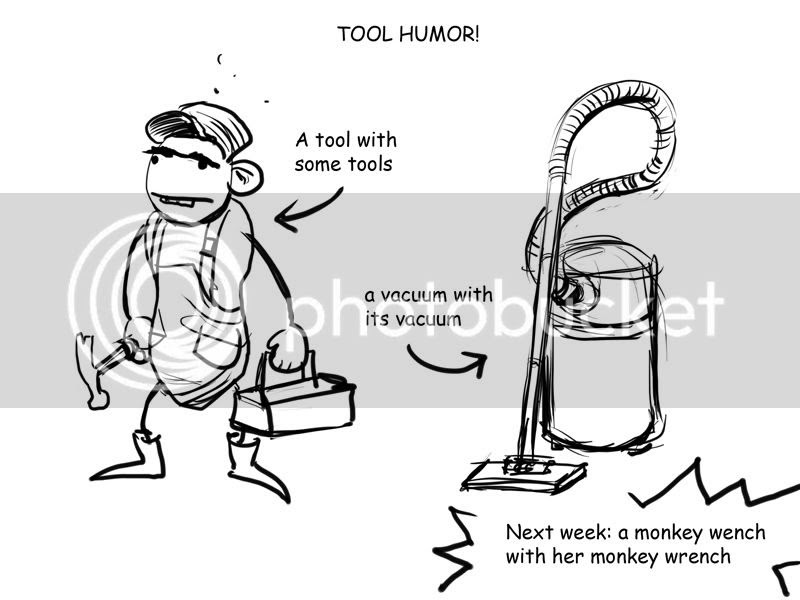 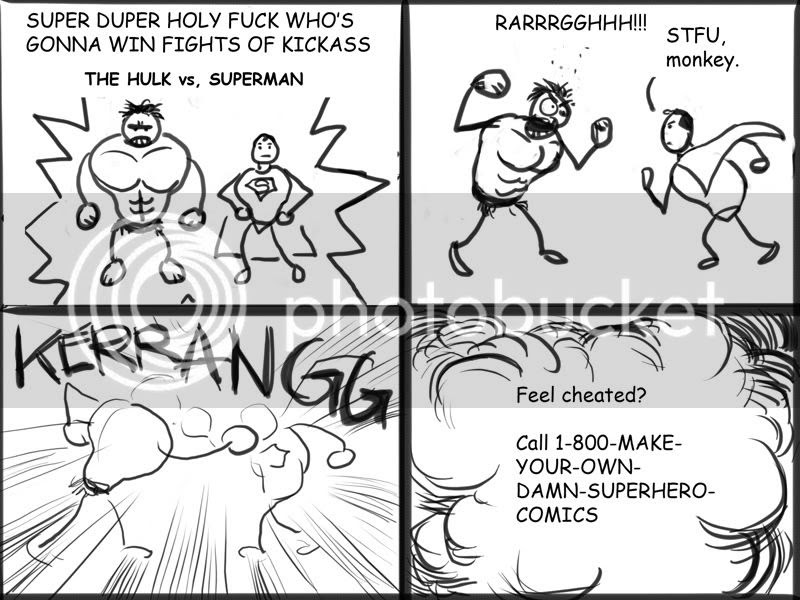 Posted by Marius Vibe at 5:49 AM No comments: 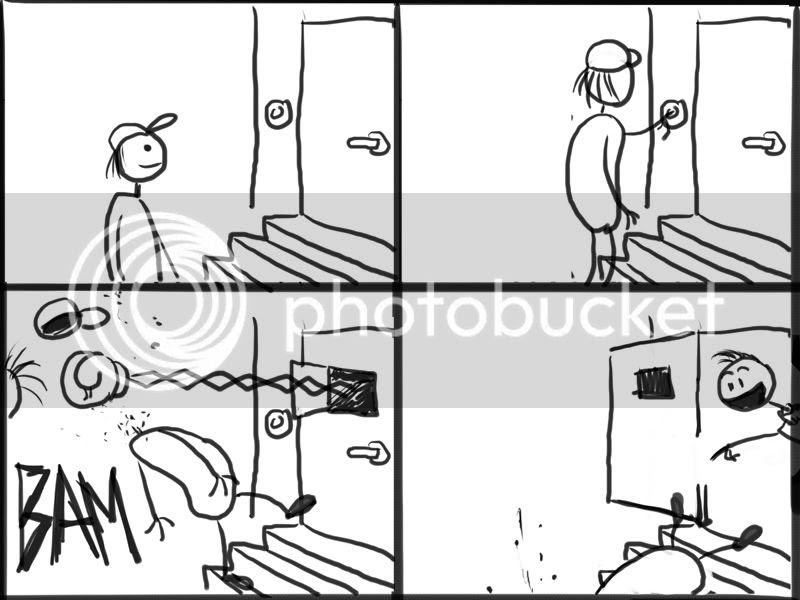 Posted by Marius Vibe at 4:30 AM No comments: 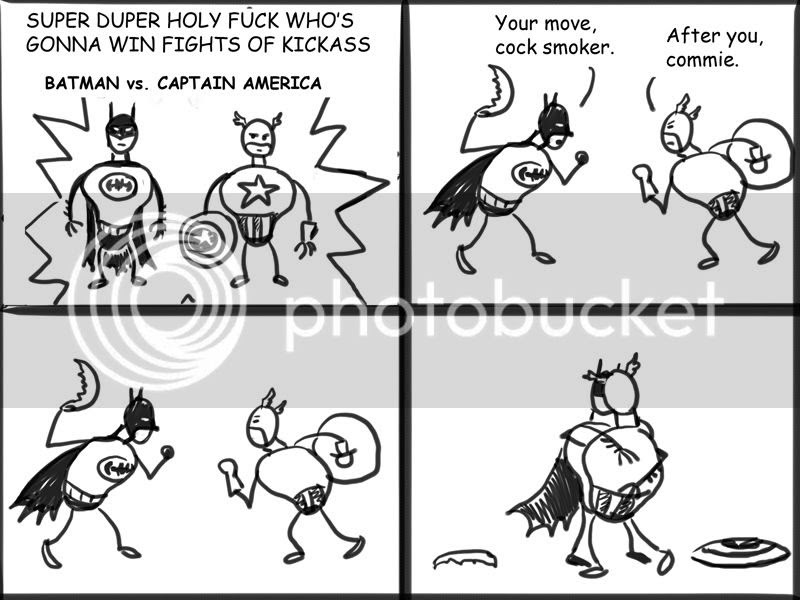 Posted by Marius Vibe at 1:25 AM No comments: 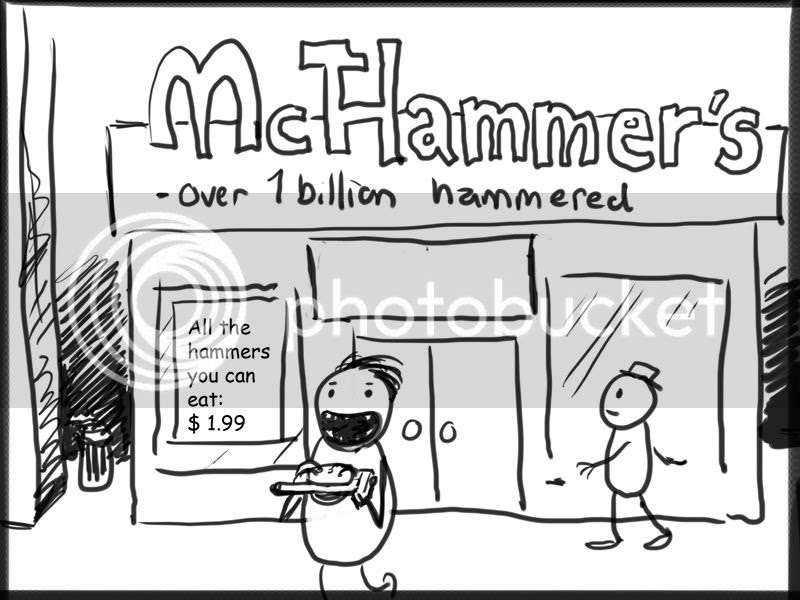 Posted by Marius Vibe at 3:11 PM No comments: 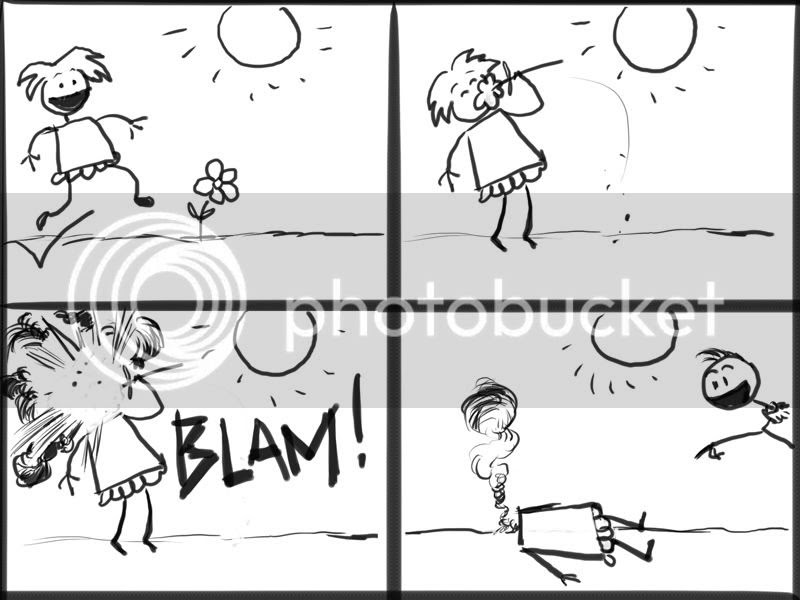 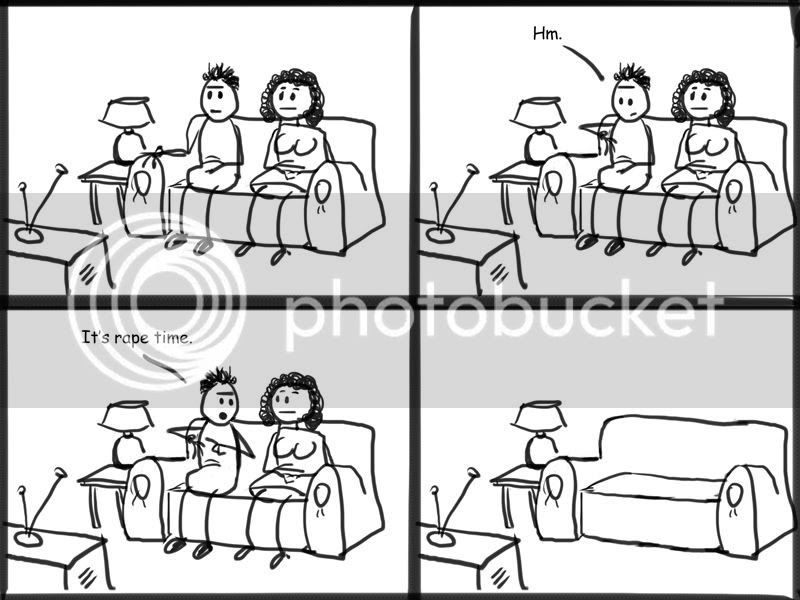 Posted by Marius Vibe at 3:19 PM No comments:

Posted by Marius Vibe at 3:15 PM No comments:

Posted by Marius Vibe at 9:48 AM No comments:

Posted by Marius Vibe at 9:44 AM No comments:

Posted by Marius Vibe at 3:28 PM No comments:

Posted by Marius Vibe at 3:05 PM No comments:

Posted by Marius Vibe at 3:15 PM No comments:

Posted by Marius Vibe at 3:33 AM No comments:

Posted by Marius Vibe at 2:27 AM No comments:

Posted by Marius Vibe at 6:51 AM No comments:

Posted by Marius Vibe at 2:57 AM No comments:

Posted by Marius Vibe at 3:11 PM No comments:

Posted by Marius Vibe at 7:26 AM No comments:

Posted by Marius Vibe at 4:37 PM No comments: 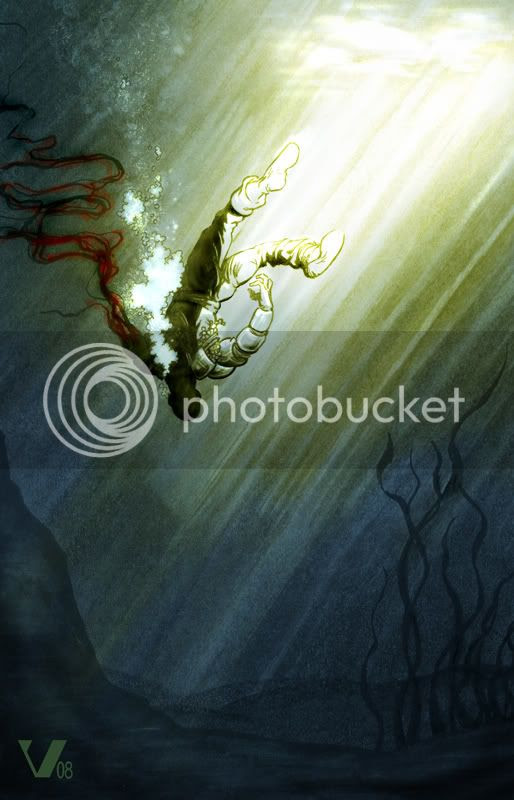 Lately, I haven't exactly been feeling that things have been going my way creatively. Projects seem to crash and burn as soon as I've managed to invest time and heart in them, and it's slowly started to grind me down.

So I decided to return, briefly, to something I've been doing a lot and feel comfortable with: Fantasy illustration. Well, "returning" may be a strong word - all I did was remember to post some art I finished a couple of years ago on Elfwood. Anyway, it was elected "Mod's Choice" that day. Not a huge feat, I know... but at this point, I'm pathetic enough to be cheered up by any pat on the shoulder from someone who isn't a personal friend; someone who's got no reason to give me praise, unless they truly appreciate my work.

... and I'm actually pleased with that pic myself.
Posted by Marius Vibe at 3:07 PM 1 comment: 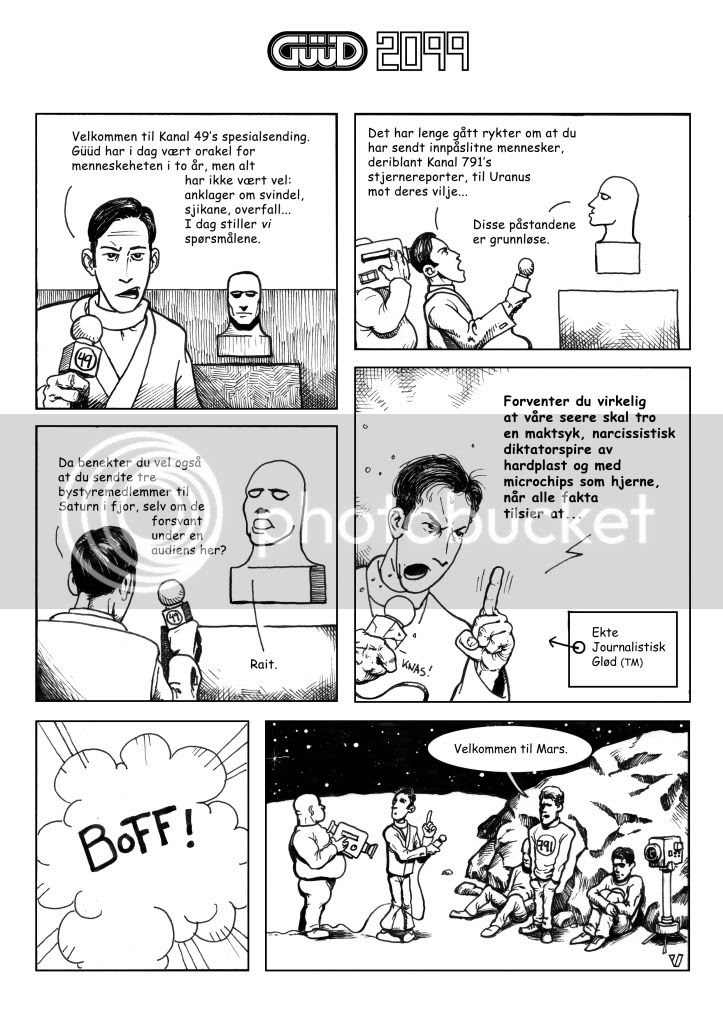 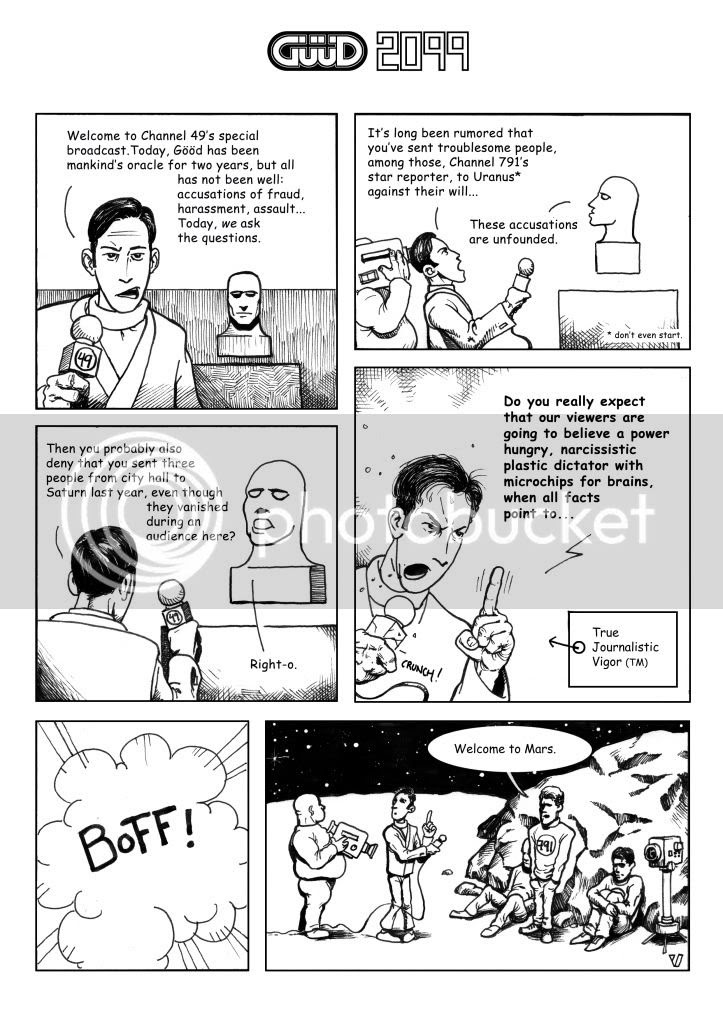 Do you like animation at all? AND you like podcasts?
Well, then you MUST head over here:

Reviews, interviews, insights and just plain ol' fun.
Be there, or be... a moron.
Posted by Marius Vibe at 10:00 AM No comments:

Posted by Marius Vibe at 2:34 AM No comments:

Posted by Marius Vibe at 4:55 AM No comments: