Disclaimer: This will be a short review. Not because of Goldeneye or anything, but because Quantum of Solace annoys me, and I don't want to dwell on it too long. I apologize that this has to be the one to close up the Superficial Bond Reviews. Blame Marc Forster, Paul Haggis, Neal Purvis and Robert Wade, to name but a few.

* First of all: "Quantum of Solace"? Worst name out of all the 22 bond movies. It's a big, steaming pile of nonsense, and it doesn't exactly roll off the tongue, now does it?

* Quanundrum of Solstice starts with the worst car chase I've ever seen. The director has no sense of direction, continuity, axis, movement or anything that can give the audience a proper idea of what's going on. Instead, it's the ol' "shaking the camera violently" trick that useless, uncreative directors have utilized ad nauseam for years now, because they don't know how to create a sense of intensity the proper way.
I wonder how much the camera would shake if I smashed it into the director's skull, and if it would add intensity to the experience. Thanks for the headache, shithead.

* The direction of the fight scenes in Quaalude of Surprise is perhaps the worst I've ever seen.
First, there's this film school freshman attempt at "art", where Bond is chasing someone, and it's intercut with a horse race. I laugh my "oh, that's so sad" laugh and shake my head, even though there's nobody there who can see me. I just can't help myself. Well, at least it isn't freerunning again.
That chase leads to a ridiculous scene where 007 fights the bad guy while hanging from ropes and bumping into some scaffolding, and besides the fact that this kind of shit belongs in an old Jet Li movie or in Cirque de Soleil, the direction/editing is so shitty, you can't even see what's going on anyway.
This guy couldn't make a coherent fight scene if he nailed two actors to the floor opposite each other and told them to punch rhythmically.

* There's a shootout at the opera. The director uses some intercutting of the action with what transpires on stage. It's very film school freshman-like, meaning "it's shit". 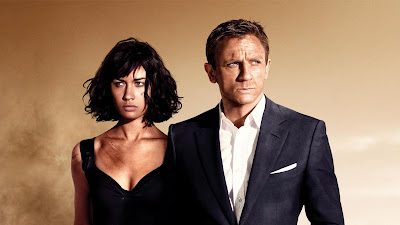 * Bond is topless again! I'm actually surprised that the camera has stopped vibrating for a long enough period of time that I'm able to see this.
It strikes me that in that respect, the director may be the perfect one for Daniel Craig, since his ShakyCam is actually able to mask the fact that Craig has the face of last year's Halloween pumpkin.
You can keep your shirt on now, Daniel!

* There's an airplane duel scene, which is... hm, not so shit, actually. Interesting. And then, there's an elevator fight, which is brilliant! I'm so confused!
Maybe... no. The rest is shit.

* The so-called Bond girls are so poorly written here, that I'll ignore them completely, and skip directly to the bad guy - Some French Dude.
Some French Dude is bad because... well, I can't remember. He's so bland, I can't even call him "shit". He's like beige, odorless shit.
His sinister plan has something to do with stealing water or some kind of boring eco crime nobody gives a crap about, and his awe-inspiring lair is a cluster of shitty, wooden barracks in the middle of a featureless desert.
For some poorly explained reason, the entire barracks is packed with gas canisters that will detonate easily, so that the explosions can serve as a substitute for real excitement.
007 goes there to fight Some French Dude, and all of a sudden everyone involved in making Quidditch of Slutchutch has forgotten that Bond just beat the shit out half a dozen agents in an elevator. Bond has to fight this guy, who has no martial arts skills, no fighting experience, nothing, for all we know - and has a hard time defeating him, just because he's the end-of-level boss.

* Bond defeats Some French Guy, who promptly commits suicide out of disappointment with the 22nd Bond movie.
I'm tempted, too - but choose instead to just call QoS "the worst Bond movie ever", alongside Die Another Day.
This was worse in many ways... but at least, it kinda tried to be a Bond movie.